They are the millennial version of Ernie Banks and Billy Williams, the bookend faces of the Cubs.

Anthony Rizzo, 28, and Kris Bryant, 26, not only represent a franchise that is reveling in its greatest run of success in 110 years, but they also have become Major League Baseball’s ultimate role models, epitomizing much that is right about the game, on and off the field.

Rizzo, a three-time All-Star and World Series champion, earned baseball’s top humanitarian honor last year when he was recipient of the 2017 Roberto Clemente Award. He left the Cubs’ spring-training camp early this spring to speak at a prayer vigil for the 17 students killed at his alma mater, Stoneman Douglas High School in Parkland, Florida.

They will forever be linked to 2016, leading the Cubs to their first World Series title in 108 years, and they are expected to be teammates through at least 2021 when each are eligible for free agency.

As they embark on what could be the back nine of their baseball pairing, the Chicago icons sat down with USA TODAY Sports as they broke camp in Mesa, Arizona, to discuss everything from mass murders in their hometowns, their friendship, the cruelty of social media and Bryce Harper.

Question: Did you two ever meet in San Diego when Bryant was playing at the University of San Diego and Rizzo was with the San Diego Padres?

Bryant: “He was a struggling prospect.”

Rizzo: “He was sitting in the nosebleeds and saw me play.”

Bryant: “OK, there was a $5 college night. I think it was on a Tuesday, and they put us all the way up in the right field deck, but I don’t remember seeing him play at all.”

Bryant: “Were you on the team that night when Carlos Quentin charged [Zack] Greinke?”

Bryant: “Well, I was at that game. I think we first met when I got drafted and took batting practice.”

Q: You hit it off right away?

Bryant: “He had long curly hair, and I was a scared guy who just got drafted. He knew I was a first-round pick. And he says, ‘Oh, you’re buying the spread today.’ I didn’t know what to say, I was a little scared.” 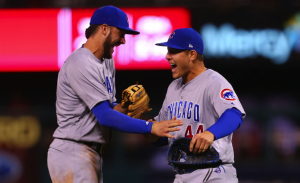 Q: You ever joke with Bryant that the game shouldn’t be this easy with all of his honors and World Series title so early in his career?

Rizzo: “No, someone said that to me one time, telling me, ‘Try to make the game harder.’ I didn’t like it. It stuck with me forever. So I didn’t say anything even after Golden Spikes, the Minor League Player of the Year, the Rookie of the Year, World Series, MVP, but nothing last year.”

Q: Do you feel a responsibility to have an impact in the community as much as on the field?

Bryant: “I don’t do nearly as much as he does. Baseball is great and all, but we have such a platform that we can use and reach a lot of people, and he certainly does that. He raises a lot of money for people who need it, cancer patients, kids, hospital visits. It really makes all of the stuff on the field seem like peanuts compared to what he does off the field.”

Rizzo: “For sure, that’s how I was raised. Sometimes athletes don’t give ourselves the best names, but being able to put this uniform on gives us a platform to put on a smile and help out families. I love playing baseball. I give it my all. But to be able to go out and put life in perspective and make someone smile is way more important than what goes on in the field.”

Q: How difficult was it for you guys emotionally with the massacres that left 58 dead at a music festival on the Las Vegas Strip and 17 students and teachers killed at Stoneman Douglas High School?

Bryant: “You see other things happening in the world, but when it’s close to home, it hits you. There’s a lot of crazy stuff in our country and around the world. When it’s close to you, or our hometown, with people you know, you really open your eyes to it. It’s just so gut-wrenching.”

Rizzo: “The sad thing is that we’re all numb to it. You hear school shooting. You hear bombers. You go on with your day because we’re so numb to it until it’s something huge and everybody pays attention to it. Things are happening all of the time, but we’re just so numb to it until it hits our hometown or your backyard like it did for Kris and myself.”

Q: You ever wish you could have played in a different era without social media when players seemed to have more fun and less public scrutiny?

Rizzo: “It’s so different now. I still have a ton of fun playing, on and off the field. But in this era of social media and camera phones, it’s just the way the world is now.”

Bryant: “That would be the best part of playing in a different era, not having social media. Back then, it was just all about winning. You didn’t care about exit velo, spin rate, hitting in this situation, all of these stupid numbers that are out there. It was just about winning.

“The biggest thing now is that everybody has an opinion. You’re scrutinized so much for things that you do on the field when all you’re doing is trying to win and help your team out. When the season starts for me, I take Twitter off my phone.”

Rizzo: “Obviously, I have my foundation [Anthony Rizzo Family Foundation] on social media. I love it. At the same time, if you read all of the comments and let it affect you, it’s not good for you. You have to balance it. We can have a platform and do so much to reach people. People look up to us. They’re looking to see how we’re doing, and how we’re doing it. And coming to a game in August, when we’re tired, but they have had tickets since Christmas. That one game they come see the guys. If you let it bother you and read all of the comments, that’s one of the biggest problems are all of these bullies on social media. They see you face to face and they love you, but behind a computer, they like to make it seem like you’re less than a person.

Q: How enjoyable is it seeing this organization evolve from being lovable losers to one that has been to the NLCS three consecutive years with a pennant and a World Series title?

Rizzo: “It’s really cool to see this whole thing come together. You see Cubs fans go from losing, losing, losing to winning, winning, winning. And now they’re calling on [2018-19 free agent] Bryce Harper to turn our organization around. I tell them, ‘If you’re counting on Bryce to turn us around, you’ve got real issues.’ We’re really good right now. He would help us, but if that’s who you’re banking on, that’s when you know we’re in a really good spot.”

Q: Do you talk during the offseason, too?

Bryant, laughing: “I see him enough during the year.”

Rizzo: “I don’t talk to no one in the offseason. It’s great.”